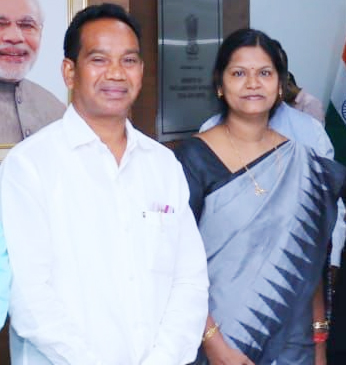 Odisha’s ST & SC Development & Law Minister Mr.Saraka and Water Resources, Commerce & Transport Minister Ms.Sahu have signed as proposers in the nomination papers of Murmu on Thursday. The BJD has taken this move after BJP President JP Nadda spoke to Mr.Patnaik in this regard.

“BJP President Shri @JPNadda ji spoke to me about the filing of nomination of Smt #DraupadiMurmu ji for #PresidentElection. My cabinet colleagues Shri @saraka_fan and Smt @TukuniSahu will sign nomination papers today and attend the event tomorrow,” tweeted the Chief Minister.

Prime Minister Narendra Modi, senior Ministers Rajnath Singh and Amit Shah, and BJP President J P Nadda will be among her other proposers. Union Ministers and senior BJP leaders are signing on as proposers and seconders at Mr.Joshi’s residence.

Similarly, several BJP leaders from Odisha including 10 MLAs also visited Delhi to remain present during the filing of nomination papers by the NDA candidate.

As Smt.Murmu is a daughter of Odisha, BJD president Mr.Patnaik yesterday appealed to all the members of Odisha Legislative Assembly, cutting across party lines, to extend unanimous support to elect her to the country’s highest office.

Meanwhile, Smt.Murmu reached New Delhi this morning. She will file the nomination on June 24.

Smt.Murmu, who was welcomed by BJP leaders at the airport, is staying at the Odisha Bhawan. She called on Prime Minister Narendra Modi.

In a brief statement issued before she left for the national capital, Smt.Murmu said, “I thank all and seek cooperation from everyone for the presidential election. I will meet all voters (lawmakers) and seek their support before July 18.”

If elected, she will be the first tribal president of India and the second woman in the post.

Tathya Correspondent - December 27, 2021 0
Bhubaneswar: With Rural Polls in the state likely to be held before March, 2022, the Odisha unit of BJP on 27 December...