Bhubaneswar: There should be no doubt that the Union Budget, 2022-23 has focused on infrastructure development and capital expenditure whereas the social sector has not received so much attention from the Budget makers. This has been rightly pointed out by Chief Minister Naveen Patnaik in his budget reaction, though he welcomed some of the proposals presented by Union Finance Minister Nirmala Sitharaman.

In his budget reaction, Mr.Patnaik said, “The sectoral allocation is slashed in critical sectors like agriculture, farmers’ welfare, higher education, rural development and women & child development. This could hamper inclusive growth.” This apart, Naveen also said that reduction in MGNREGS in a pandemic situation is not going to help poor people.

Odisha CM’s reactions were well balanced and highlighted the lacunas in the Union Budget of a welfare-oriented country. It is a fact that infrastructure is essential, but social welfare should complement it. Both the sectors should go hand in hand for inclusive growth.

The Budget is never a populist one even though five States including BJP-ruled Uttar Pradesh, Uttarakhand, Goa and Manipur are going for polls. The Budget refused to give relief to the common man as there is no provision against skyrocketing price rise and more employment generation during the pandemic situation. To make matters worse, the Centre has slashed the funds under Mahatma Gandhi National Rural Employment Scheme (MGNREGS).  There is also little provision to boost the MSME sector. Agriculture, MSME and MGNREGG used to provide employment to the people which have been overlooked, experts feel.

Therefore, here is an opportunity for a state like Odisha which is getting ready for its Annual Budget-2022-23. If all including the Chief Minister agree that the social sector has been neglected, the state too has certain responsibility to take up the issues of the people. Since the state is likely to reap benefits from huge Capital Expenditure (CAPEX) made in the Central Budget, Odisha should spend more money on the social sector. If the Central funds will take care of the infrastructure development and capital expenditure, the state should focus on the social sector and bridge the gap.

In the Annual Budget for 2021-22, Odisha made a provision of Rs 10,000 crore for the health sector at a total outlay of around Rs 1.75 lakh crore. Since the state is all set to present another Annual Budget of about Rs 2 lakh crore this time for 2022-23, the amount should be enhanced to at least Rs 15,000 crore for Health Sector during pandemic. Similarly, the state can also spend more on the MGNREGS and ensure that those amounts are reimbursed from the Central Government. As such the Centre is yet to reimburse about Rs 1,000 crore towards MGNRGS spending!

How to create an alternative source of revenue generation? Agriculture, Fisheries, Dairying, and other Service sectors are required to be tapped for growth. Odisha can construct more cold storages across the State for storing fruits, vegetables, potato, onion, tomato and others instead of importing them from West Bengal, Maharashtra, Andhra Pradesh and Telangana. In the process, the state can provide rural infrastructure and jobs to the local people, thus boosting the rural economy. The farmers will be more encouraged to go for cash crops if they get cold storages and make better income. The state can fetch more funds from NABARD under RIDF and other sources. Tourism and MSME sectors need more boosts, which will spur growth and employment. Instead of diverting the state’s revenue on populist schemes, Odisha can make meaningful expenditure in creating jobs and employment which will ensure a better inclusive growth of the state.

At the same time, the state must make strong demands for the compensation of losses due to natural calamities, which cause damages of at least Rs.25,000 crore to the state every year. The centre must cooperate and assist the state in this regard as Odisha has turned to be ‘Disaster Zone’.

Take for instance the houses damaged during the cyclone Fani in 2019. The state is yet to avail 1.86 lakh houses for the poor even as the centre promised to sanction such houses for these poor people. PM Modi promised houses for all by 2022. Now, the housing scheme is embroiled in politics. While ruling BJD demands more houses, the opposition BJP raised the corruption issue.

Odisha’s share in shared tax was budgeted at Rs. 30,136 crore in 2021-22 Budget Estimate. However, it amounts to Rs.33,696 crore in Revised Estimate. The gain of revenue to Odisha therein totals Rs.3559.99 crore. This is meager and the State requires greater attention of the Central Government as it has been facing disaster after disaster every year.

The state has certain specific issues like the reduction of the subsidies on food and fertilizer from 11 per cent to 9.77 per cent by the Centre. This decline of 1.2 per cent amounts to Rs 10,313 crore. This will affect the farmers and hit the community hard during the pandemic. Odisha is asking for its share in cess and surcharge. The Centre should also give share to the states in cess and surcharge for the welfare of the local people sustaining the brunt of mining activities. Sadly, these issues were ignored in the Union Budget and Odisha should continue its demand and its Members of Parliament should make a united presentation highlighting the issues during the detailed discussion of the Union Budget, so that state’s concern will be taken care of. 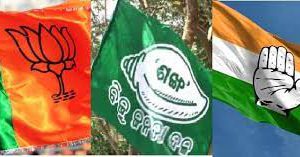 Braja Mishra - April 23, 2022 0
Bhubaneswar: Is there any politics behind implementation of the Aspirational Districts (ADs) Programme of Niti Aayog launched by the Union Government in...