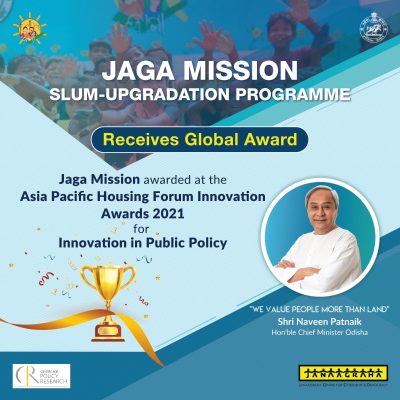 Bhubaneswar: The Housing & Urban Development Department of Government of Odisha on Thursday won the Asia Pacific Housing Forum Innovation Awards 2021, a global recognition for its flagship initiative – The Jaga Mission.

The award was given for Innovation in Public Policy in recognition of Jaga Mission’s Slum Upgradation program. This award was administered by an international jury which selected Jaga Mission as a winner through a competitive process from amongst 50 programs from several countries in Asia Pacific region.

Jaga Mission has successfully demonstrated that governments globally need to have a paradigm shift in their approach to recognize the informal settlements and the slum dwellers as an indispensable part of the city fabric. These slum dwellers must be empowered with land tenure security and better living habitat; instead of treating them as encroachers and evicting them.

175,000 slum families are already provided with land tenure security and 550 slums in 28 cities have already been transformed into livable habitats.

Jaga Mission serves as a torchbearer for the developing world. It acts as a model public policy to bring about long-lasting happiness in the lives of the poor and marginalized living in informal settlements.

Tathya Correspondent - December 31, 2021 0
Bhubaneswar: A day ahead of the New Year, the State Cabinet has decided to provide land rights to slum dwellers of five...