Bhubaneswar: In adherence to 5T model of Governance, Information & Public Relations, Principal Secretary Bishnupada Sethi on Monday advised Information Officers (IOs) to use technology in dissemination of effective and correct information to the public in a short span of time.

Mr.Sethi was addressing the IOs of the Department of Information & Public Relations here.

He also directed concerned officials to conduct a training program of the Officers for effective use and management of social media.

He advised the IOs to collect detailed information from the Departments and consult concerned Senior Officers to produce success stories of various Programs and Schemes of the Odisha Government, by the use of Information and Technology (IT).

Known as a pro-people Mandarin, the Principal Secretary advised the IOs that people required to be sensitized about the benefits of the State Government Programs, this will empower them as they will reap benefits of the programs.

He further advised for massive publicity of various programs, schemes and achievements of the State Government. During the occasion he also discussed with IOs of various Departments.

I&PR Director Indramani Tripathy has instructed the IOs to work sincerely in accordance with the Government’s need.

He advised the IOs to activate the information collection efforts and covered pro-people activities in an effective way.

Director (Technical) Niranjan Sethi has expressed hope that the Information Officers will work as per the advice of the Principal Secretary.

Joint Director Pramod Kumar Mallick and Surendra Kumar Parida along with other senior officers of the department were present at the meeting. 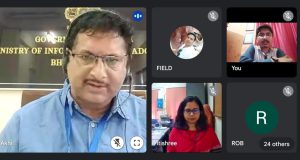 Tathya Correspondent - May 11, 2022 0
Bhubaneswar: Transformation, progress, development, growth largely depend up on the advancement of technology. This was reiterated by the panellists...