This one is a two-year long fellowship conceived to create opportunity for young, dynamic individuals to contribute to enhancing skill development at the grassroots.

The two-year fellowship seeks to combine classroom sessions by academic partner IIMs  with an intensive field immersion at the district level to create credible plans and identify barriers in raising employment, economic output, and promote livelihoods in rural areas.

Pradhan while speaking on the occasion, called upon fellows to act as catalysts of social change at the grassroots by driving skill development efforts. He also called upon district collectors and academic partner IIMs to facilitate the fellows and script a success story of change through this fellowship.

He said that under the leadership of Prime Minister Narendra Modi, we are moving towards an Aatmanirbhar Bharat.

In line with the requirements of 21st century and local realities, Pradhan called upon the fellows to work with global thinking and local approach including integrating local language in the skill development efforts. 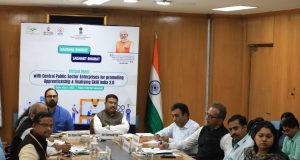 Tathya Correspondent - May 2, 2022 0
New Delhi: Following the objective of engaging more than 10 lakh apprentices over the next one year, the Ministry of Skill Development...