New Delhi: 1997 Batch IAS Officer, Subhashish Panda on Saturday received a vaccine against Novel Corona Virus (COVID-19) for which inoculation drive is going on across the Country.

Mr.Panda is one of the first IAS Officers, who took the jab in All India Institute of Medical Science (AIIMS), New Delhi.

Mr.Panda is the Deputy Director (Administration) AIIMS New Delhi has taken the vaccine shot to instill confidence among the beneficiaries, said a senior doctor of AIIMS.

Known for his helpful and benevolent attitude, Mr.Panda has been always helping the people during his entire career in general and his tenure in AIIMS New Delhi in particular.

Take for example Conjoined Twins of Odisha Jaga and Balia, who stayed in AIIMS New Delhi for two long years for operation and recuperation received all out support of Mr.Panda, admitted his batch mate and senior IAS Officer, Sanjeeb Kumar Mishra.

Mr.Mishra, who served long time as Resident Commissioner of Odisha at New Delhi is very fond of Mr.Panda.

He recounted sincere efforts of Mr.Panda in coordinating efforts to collect funds for Very Severe Cyclonic Storm-FANI, which hit Odisha on 3 May, 2019.

This was a rare moment of gratitude shown by doctors, staff of AIIMS, New Delhi towards Cyclone Devastated Odisha.

Director AIIMS Dr.Randip Guleria came with the team of doctors along with Mr.Panda and presented a Cheque of Rs.93.89 Lakh to Chief Minister Naveen Patnaik.

Chief Minister Mr.Patnaik was on New Delhi tour and after receiving the cheque, he thanked the doctors and staff for their contribution for Odisha, which witnessed massive devastation due to cyclone-FANI.

Both the brothers are good hearted, helpful and always take up the cause of the State on any issue, be it helping the hapless people in AIIMS or extending Banking Care for this Eastern State, said Principal Secretary MSME and School and Mass Education, Government of Odisha, Satyabrat Sahu. 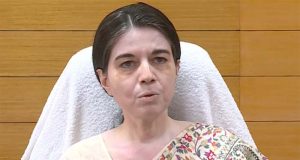