Bhubaneswar: In an aim to make its claim stronger, the State Government has decided to set up Eco tourism camps at disputed Kotia village and Deomali hill top in Koraput district.

This was decided at a high-level meeting held under the Chairmanship of Chief Secretary Suresh Chandra Mahapatra here on Friday.

Notably, neighboring Andhra Pradesh is claiming that Kotia is part of its territory. Strongly objecting to the claim of AP, the Odisha government has moved to the Supreme Court and the case is under sub-judice now.

The new eco-tourism approved in the meeting included Deomali hill top in Koraput district, Kotia in Koraput, Jakam of Kalahandi, Nawana of Similipal north, silviculture garden of Phulbani, Muhana Muhana at Astaranga in Puri, Khadakhai dam in Rairangpur, Mahendragiri from Ganjam side in Berhampur, Kanjipani Ghat and Hadagarh dam in Keonjhar forest divisions.

Similarly, new nature camps for the day tourists would be developed at Rani Duduma of Koraput, Dhaltangarh of Cuttack, and Bhandarpahar near Jhadeswari temple of Nayagarh forest divisions.

While approving the proposals, the Chief Secretary gave strict directions for proper maintenance of the facilities already created and being created newly through close monitoring. Concerned Divisional Forest Officers (DFOs) and supervising officers were asked to go inside each cottage and verify proper functioning of all facilities including the dining places, toilets etc.

He also directed the Forest Department to involve local communities in hospitality and upkeep of the spots so that they earn their livelihood and preserve natural environs of the spots.

PCCF Wildlife Sashi Paul appraised that as of now 50 total eco-retreat destinations and nature camps are operating in the State. With these 13 new approvals, the total number of spots would increase to 63. These spots are growing popular with increasing footfalls and revenue generation.

Online booking facility has also been rolled out. So far, around Rs.95 crore has been invested in development of the eco-destinations.

Chief Secretary Mahapatra said, “Conservation of forest and nature is turning a sustainable treasure for the community, and promote that by all possible means”. He also advised to strengthen the intervention through the formation of Eco-Tourism Society. 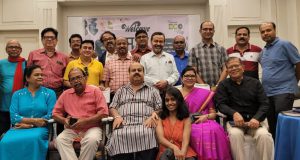 Tathya Correspondent - May 23, 2022 0
Bhubaneswar: A seminar was held at Hotel Mayfair about future prospects and implementation of Waldenwoods Eco village established by Waldenwoods Foundation, a...