Puri: Thousands of devotees witnessed the ‘Bahuda Jatra’ ‘Return Of Chariots’ of Trinity.

Trinity — Lord Balabhadra, Devi Subhadra and Lord Jagannath, along with Chakraraj Sudarshan, were taken to their respective chariots in a ceremonial procession, called ‘Pahandi Bije’ with ‘Tahia’ (flower crown) on their heads.

As the chariots — Tajadwaja (Balabhadra), Darpadalan (Subhadra and Sudarshan) and Nandighosh (Jagannath) — started their three-km journey from Gundicha temple to the 12th-century Jagannath shrine, devotees danced, cried, fell on the ground, invoking the blessings of the trinity by raising their hands.

Devotees are allowed to participate in the Ratha Jatra rituals after two years. The seaside town is brimming with people from across the country as COVID-related restrictions were lifted.

On Ratha Jatra, the Trinity is taken to the Shree Gundicha temple, their birthplace, while on ‘Bahuda Jatra’, they are brought back to the Jagannath temple after a week.

‘Bahuda Jatra’ is held on the ninth day of Shukla Paksha in Ashadha month, as per the Hindu almanac.

“Having ‘darshan’ of the trinity on their chariots is considered auspicious, and it ensures no rebirth,” said a researcher of Shree Jagannath culture.

Gajapati Maharaja Dibyasingha Deb, the titular king of Puri, swept the chariots with a gold broom in a ritual known as ‘Chhera Pahanra’.

The ritual delivers the message that all, be it a king or a common man, are equal before the lord, he said.

During the Return Journey, the chariots stopped for a while near the Mausima or Ardhasani temple, the maternal aunt of Lord Jagannath. There, ‘Poda Pitha’, a sweet cake made of coconut, rice jaggery and lentils, was offered to the trinity.

The chariots then rolled towards the main temple. Nadighosh, the chariot of Jagannath, stopped near the King’s Palace where Goddess Lakshmi had a glimpse of the lord.

Heavy security was deployed at the temple town during the day-long rituals. Puri District Administration ensured facilities such as drinking water for the devotees, while the Health Department arranged ambulances.

200 Plus buses were put into service to ferry devotees to Puri, while 230 trains helped people reach the pilgrim town.

The Trinity would be mounted on the ‘Ratna Simhasana’, the bejewelled throne, following a ceremony called ‘Neeladribije’ on 12 July. 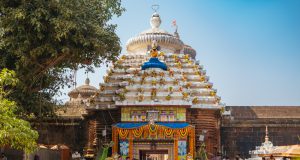 Tathya Correspondent - May 31, 2022 0
Bhubaneswar: In an aim to ensure proper management of Lingaraj Temple, the State Government has urged the Union Ministry of Home Affairs...