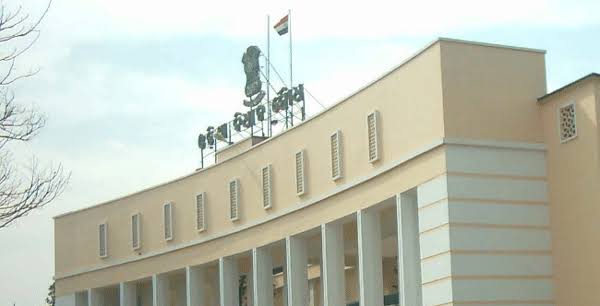 Bhubaneswar: Day Two of the Odisha Legislative Assembly’s Budget session was completely washed out with the House transacting no business due to the pandemonium created by the opposition BJP and Congress members who demanded immediate lifting of paddy in different mandis across the state.

The Opposition BJP and Congress members remained adamant and refused to accept Speaker Surjya Narayan Patro’s request to participate in the proceeding.

The House was adjourned several times in both the prelaunch and post lunch period.

Even if the Speaker convened an all-party meeting to resolve the stalemate, no agreement could be achieved. While Congress members demanded that the House must accept their notice for discussion of alleged irregularities in the paddy procurement after suspending all other businesses, the BJP MLAs wanted an announcement from the government that all paddy bags lying in mandis be lifted within 7 days.

Earlier, the Speaker had not accepted the Congress and BJP’s notice for discussion on the issue relating to problems being faced by farmers for non-lifting of their paddy in the state run mandis.

The issue was raised in the Assembly as soon as it assembled for the Question Hour at 10.30 am by BJP members, who rushed to the well of the House demanding immediate lifting of paddy in several mandis.

They started raising slogans against the BJD dispensation in the state, alleging that the government did not procure paddy from farmers who have incurred huge losses.

The saffron party members also alleged that farmers have been waiting at the government-run ‘mandis’ for several days and unable to sell their produce as the regulated markets have stocks of the crop.

Congress legislators led by party’s chief whip Taraprasad Bahinipati rushed to the well of the House over the paddy procurement issues and attempted to climb the speaker’s podium.

Even some of them attempted to remove the fibre shield put before the Speaker’s chair and made efforts to snatch papers from his desk.

Speaker Mr. Patro’s request to members seeking their cooperation failed to yield no result forcing him to announce two adjournments during the pre-lunch session and at least seven back to back adjournments in the post-lunch session before convening the all party meeting.

Congress Legislature Party leader Narasingha Mishra said his party will not allow any transaction in the House until the government comes up for a detailed discussion on the issue after suspending all other businesses.

“We will not allow the House to function until all the paddy bags are cleared from the ‘mandis’,” Congress whip Taraprasad Bahinipati said.

Leader of Opposition Pradeep Kumar Naik outside the House said: “We will not cooperate unless the government gives assurance to the House that all the paddy bags lying in mandis will be lifted within 7 days. There is no point in discussion. Now, the government must act instead of making assurances.”

The BJP is not going to bow down to the issues severely affecting the farmers. “It is strange that the government has not been able to procure Kharif paddy from the farmers even as the Rabi crop season has already been started,” the Leader of Opposition said.

BJP Deputy Leader in the House Bishnu Chanran Sethi demanded the procurement of paddy at the earliest and payment of transportation cost to farmers.

“The Centre has been providing funds for paddy procurement, but the state government is not properly utilising it,” he told reporters outside the House.

BJD Lawmaker Debi Prasad Mishra said, “The opposition members can raise the issue but are disrupting the proceedings, which is not desired.”

Tathya Correspondent - November 14, 2021 0
Bhubaneswar: The Winter Session of State Legislative Assembly will start from 1 December and continue till 31 December. As...