Bhubaneswar: At least three persons died, several villages and towns witnessed sea water gushing into their areas while a coast districts lost a huge greenery as the very severe cyclonic storm YAAS made its landfall at a speed of about 140 KMPH near Bahanaga in Balasore district.

Though the cyclone was a moderate one this time, the criss-crossed information on the movement of the system made the situation completed, forcing the government to run from one end of Balasore district to another.

Anyway, massive deployment of rescue and restoration team helped the government and the people to get evacuated at proper time thus saving their livess.

Though initially it was assumed that the cyclone will make landfall somewhere near north Balasore, suddenly some hours before it hits the shore, the IMD said that the system will hit the shore near Ddhama port.

It was later changed that the landfall will be between Dhamnagar and Chandbali. Finally it was Bahanaga, about 50 kilometre from Balasore.

Though the IMD had predicted wind maximum speed of 140 to 155 kmph gusting 185 kmph, practically the wind velocity was about 25 kmph less and remained confined within 140 kmph.

One each deaths report came from Mayurbhanj, Balasore and Keonjhar. However, the government was yet to confirm such deaths. Two of them were due to tree falling while one woman reportedly died due to wall collapse in Mayurbhanj district.

The very severe cyclonic storm on Wednesday after pounding north Odisha with a wind speed of 130-140 kmph, inundated about 120 villages.

YAAS, which was earlier classified as a very severe cyclonic storm, hit the coast north of Dhamra in Odisha’s Bhadrak district and 50 km south of Balasore, close to Bahanaga block, around 9 am, they said.

The landfall process was over around 1.30 pm, they added.

The administration with the help of the locals is taking measures to drain out the saline water from the villages, he said.

Heavy rainfall in the Similipal National Park in Mayurbhanj district sparked fears of a flash flood in the Budhabalang river. In the afternoon, the water level in the river was at 21 metre against the danger level of 27 metre, Jena said.

The Mayurbhanj district administration has started evacuating certain vulnerable points on both sides of the river and also from some low-lying areas in the Baripada town, he said.

Restoration works for power lines have started in some places in Jagatsinghpur, Kendrapara and Jajpur district after cables were snapped, Jena said, adding that not much damage was caused in these districts.

The sea will remain rough till Thursday and the accompanying rain will continue, he said.

The wind will slow down by the evening and the cyclone is likely to leave Odisha for Jharkhand by midnight, Jena said.

Odisha shifted 6.5 lakh people to safer places, while West Bengal moved 15 lakh people ahead of the cyclone, amid concerns over following COVID-19 norms at the temporary shelters as the two states battled the pandemic, reporting thousands of new cases daily. 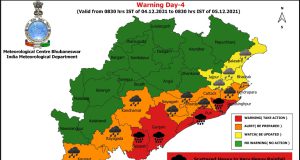 Tathya Correspondent - December 1, 2021 0
Bhubaneswar: In the wake of the upcoming cyclone, the Special Relief Commissioner’s office has issued an advisory to Collectors of all districts...