Though the party headquarters was attacked twice in the day, the Odisha Pradesh Congress Committee (OPCC) had refrained from lodging a complaint with the police.

While miscreants during the morning hours ransacked the party’s Youth wing office in the Congress Bhawan, another group in the afternoon pulled down names plates of OPCC President and Womens’ Congress president besides breaking glass windows and other furniture in the office. However, the OPCC president’s chamber remained untouched as it was locked.

Expressing concern over the incident, senior Congress MLA Suresh Routray said: “It is a chronic disease of Congress in Odisha. Here, the people have set fire inside Congress Bhawan in the past. Today’s incident warrants stringent action against the wrong doers if they belonged to Congress.

The Jatani MLA suspected the Wednesday’s attack on Congress Bhawan as a part of a conspiracy. “I suspect that some Congress leaders have hatched conspiracy with rival BJD and BJP leaders to tarnish image of the party in the state. Some people are trying to become OPCC
president and they might be knowing who are involved in the violence,” he said.

Mr.Routray said Congress high command including Sonia Gandhi and Rahul Gandhi must take the incident seriously and take action against the party leaders and workers involved in the rampages. “Above all, Congress Bhawan is a temple for all the party workers across Odisha,”
he said.

OPCC President Niranjan Patnaik was not available for comment. Reports said a groups of youths in the morning, suspected to be party members, entered the Congress Bhawan and forced their way into the Youth Congress office by breaking the locked door, they said adding
that they also entered the chamber of Odisha Youth Congress President Smruti Lenka and ransacked the office asset before fleeing the area.

When contacted the police said it is yet to receive any complaint about the incident.
Though the exact reason behind the ransacking is yet to be known, those present in the Congress Bhawan at that time said it could be the handiwork of some disgruntled members of the Youth Congress.

A Youth Congress leader said that he was not sure about the involvement of any miscreants and the break in was perhaps by some dissatisfied members as the YC office used to remain closed most of the time.

There are allegations that Mr.Lenka meets only a selected group in the party, while the grievances of others are not heard. These YC members may have broken the lock to her chamber after not finding her in the office, a party worker said.

Mr.Lenka said he was not aware about who had ransacked his office. “As the incident took place in the Congress State Headquarters, the OPCC President may be able to speak on the incident,” he said.

On 3 October,  when the Pipili by-election result was announced a group of dissident party workers had staged an agitation in front of Congress Bhawan demanding removal of OPCC President Niranjan Patnaik for the dismal performance of the party’s candidate in the poll.

Two years ago in 2019 a group of angry party workers had ransacked Congress Bhawan in protest against the manner of allocation of party tickets for the  State election. 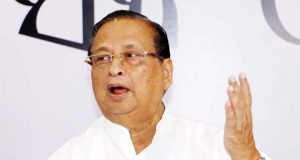