Bhubaneswar: While it was an incident free peaceful Six Hours Shutdown, normal life was completely   affected across Odisha on Monday.

While State Government offices were open, educational institutions remained closed, train services were affected and vehicles remained off the roads in the Bundh that began at 7AM.

No untoward incident, however, was reported from any district, a Home Department official said.

Congress activists blocked Rail Tracks National Highways in various parts of the State, including in the capital Bhubaneswar, leading to huge traffic jams.

Air and bus travelers also faced a tough time in reaching their destinations due to the unavailability of public transport.

Travelers Commuters suffered at bus terminuses as the All Odisha Bus Owners’ Association suspended passenger bus services across the state during the day.

As many as 25 platoons of police personnel were deployed in the State Capital to prevent any untoward incident.

“The Shut Down has been completely peaceful due to massive support from the people,” OPCC President  Niranjan Patnaik claimed.

Congress Leader said that emergency services, including ambulance, milk vans and vehicles of media and examinees were exempted from the purview of the Shut Down.

“The Shut Down was called to mount pressure on both the state and central governments to reduce tax on petroleum products which will help in lowering the prices of petrol and diesel,” PCC Chief said.

With vehicles remaining off the roads, many government employees pedaled to their offices across the State including Bhubaneswar.

The main gates of Lok Seva Bhavan were closed at 10.15 AM to prevent agitators from entering the premises while employees used side gates for entry and exit, a Home Department official said.

Congress workers offered chocolates to people venturing on the streets of Cuttack on their private vehicles during the Shut Down.

Governing BJD neither supported nor opposed the Shut Down but opposition BJP criticized the Congress for causing trouble to the people by enforcing the Bundh.

“The Congress is facing an identity crisis and it called for the Shut Down to divert people’s attention from its internal squabbles.

“The State Government should also announce a reduction in VAT and opt for GST on petroleum products to bring down the prices of petrol and diesel,” BJP Deputy Leader in OLA Bishnu Charan Sethi, said.

An East Coast Railways Press Note said that the agitation disrupted train services partially. As a result, few trains have been controlled at different Stations for a few minutes

It informed that the agitation started at Talcher Station at about 0600hrs, at Bhubaneswar from 0700hrs, at Dhenkanal from 0730hrs, at Chhatrapur from 0850hrs and at Puri from 1050hrs.

The 08448 Koraput-Bhubaneswar Special was detained at Dhenkanal from 0747hrs to 0820hrs while the 02815 Puri-Anand Vihar Special left Puri at 1120hrs instead of its scheduled time at 1100hrs, Press Release said. 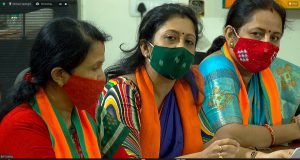 Tathya Correspondent - July 18, 2021 0
Bhubaneswar; The first executive body meeting of the State unit of BJP Mahila Morcha was held under the chairmanship of state president...