The Fisheries and Animal Resources Development Department has set up the mega plant at a cost of Rs 263 crore. It is the biggest dairy plant in the State which has the capacity to process around five lakh litre milk per day.

The plant will produce curd, milk, butter, cheese, lassi, ghee and flavoured milk to consumers at an affordable price.

Inaugurating the facility, the Chief Minister said, “Omfed belongs to our farmers and is the contribution of over three lakh people of the community. The plant will help millions of milk producers by enhancing their income capacity.”

The State Government always stands with them. The plant will help millions of milk producers and enhance their income capacity, he said.

Mr.Patnaik said a target has been fixed to increase the daily production capacity of milk in the state to 10 lakh litres.

He appealed to people to work unitedly and cooperate with the Government to bring White Revolution by increasing the milk production in the State.

Omfed is the organisation of lakhs of dairy farmers of the state. Every dairy farmer has contributed to the development of Omfed.

The State Government is providing subsidies up to Rs 50 lakh to set up a dairy farm and processing unit in the state. He appealed to farmers to take advantage of it and become a partner in the development of the State.

After inaugurating the plant, the Chief Minister went on a trip around the mega dairy plant. During this, the CM halted and was offered sweet curd by Omfed officials.

After testing it, Naveen said, “Excellent……….we must order this.” 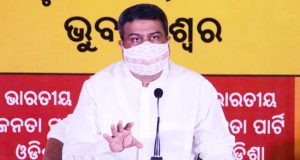 Tathya Correspondent - October 3, 2020 0
Union Minister Dharmendra Pradhan has assured  that the Minimum Support Price for farmers will continue to remain in force in the Country