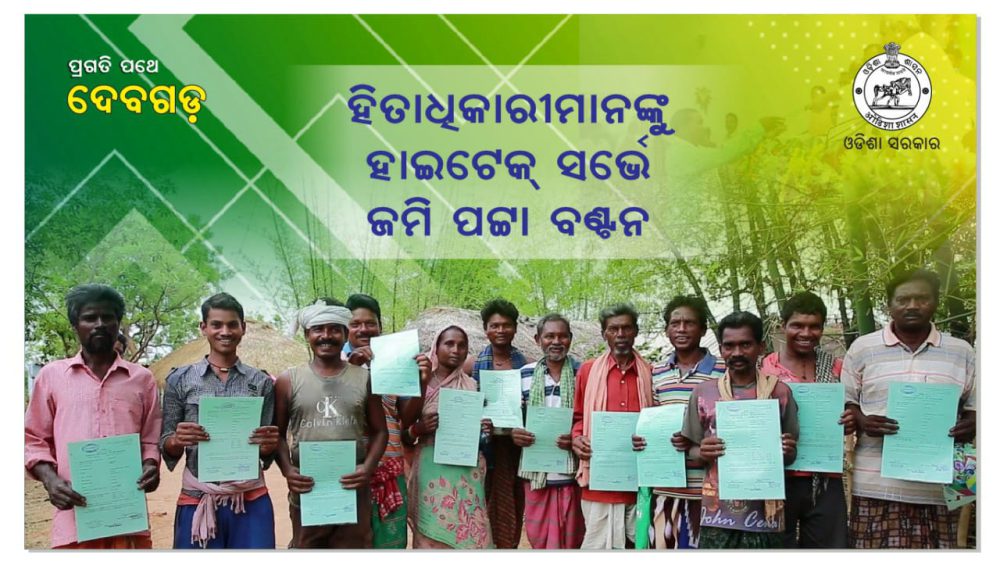 In traditional method of Survey under Odisha Survey and Settlement Act, 1958(OS&S Act), the process of survey and settlement of land was time consuming and expensive.

The cadastral maps prepared under this process were not geo-referred and was not free from error. The cadastral maps could be subject to destruction. The traditional method required huge manpower mobilisation adding to manmade error.

The OS&S Act, 1958 did not use modern technologies. To overcome this , Government of Odisha have enacted Odisha Special Survey and Settlement Act, 2012 (OSS&S Act), for undertaking survey and settlement operation in the State by adopting modern technologies to minimize the time span without compromising quality, transparency and grievance redressal.

Bishnupada Sethi, Principal Secretary Revenue and Disaster Management favored for use of technology to help out people.

The modern technology under the Act includes Aerial Photography, High Resolution Satellite Imagery, Differential Global Positioning system and Electronic Total Station system and such other technology or method as may be approved by the State Government.

Accordingly, 05 districts of Odisha (Deogarh, Sundargarh, Subarnapur, Sambalpur and Balangir) have been notified under OSS&S Act, 2012 in 2017 for Hi-tech Survey under survey/ resurvey component of DILRMP in which coordinates(longitude and latitude) based land measurement has been taken through Aerial Photography. Geo-referred village maps with detailed plots have been prepared from digital ortho images taken from aerial photography and ground truthing has been done using DGPS and ETS. The survey through aerial photography and preparation of village maps was entrusted to private agency i.e., IIC Technology Pvt. Ltd through open tender.

762 villages of Deogarh district have been notified under the OSS&S Act,2012 in 2017 and 2018. The village maps with all plots have been prepared based on aerial photography in respect of all villages of the district. After preparation of map, the preliminary Record of Rights (RoR) along with maps of land parcels were provided to tenants for filing objections.

In the second stage, the draft RoR was published after taking into account the objections on preliminary RoR by concerned Tahasildars. The objection on draft RoR was disposed of by the Sub-Collector as per rule. After recess work at the level of Sub-Collector, the final RoRs and maps have been published in respect of 554 villages of Deogarh district under seal and signature of the Collector. The preparation of RoR in balance villages are in final stage.

These maps are geo-referred and every plot can be indicated through coordinates, which was not there in the earlier cadastral maps. This survey and settlement which has used modern technologies does not require further resurvey.

The redressal mechanism at each stage has been duly followed. Any further mistake in final RoR can be also rectified by filing revision case before the ADM of the district as per the Act. Further demarcation of land can be very smooth reducing land dispute. Publication of new RoR under the Act has made possible the delivery of land services like  Survey, Settlement and updation of land records through a single window i.e. tahasil.