Puri: All arrangements have been made for the smooth conduct of the Annual Chariot Festival with cooperation of the servitors and the public, said Shree Jagannath Temple Administration (SJTA) Chief Administrator, Krishan Kumar.

With less than 48 hours to go for the Annual Rath Jatra of Lord Jagannath here, SJTA Chief Dr.Kumar said that the three chariots- Lord Jagannath’s ‘Nandighosh’, Lord Balabhadra’s ‘Taladwaja’ and Devi Subhadra’s ‘Darpadalan’ chariots are ready to roll on the Grand Road on Monday.

Some ornamental works like flower decoration and colourful cloth mending to be completed by Sunday, an official said.

In the meantime the Puri District Administration Saturday asked all the tourists and visitors to vacate hotels, lodgings and guest houses as the Odisha government has completely banned public participation in the mega festival.

The state government for the second consecutive year, has restricted the people’s participation and large gathering in the Ratha Jatra in interest of public health due to the prevailing COVID-19 pandemic.

The District Administration has also announced that a 48-hour curfew will be imposed from 8 PM of Sunday till 8 PM of Tuesday.

Samarth Verma, District Magistrate Puri  said the owners of the hotels and lodgings have been asked to ensure that no tourists stay put in the town during Rath Jatra.

The private guest houses of different companies and corporate houses have also been given similar instructions, he said.

He said during the curfew all the business establishment and essential services barring medical emergencies has been completely banned during the 48 hour curfew period.

Optical shops, medicine outlets and the shops dealing with medical equipment will remain open in other areas of the town during the curfew period. All kind of activities are banned in the three-kilometer stretch of the Grand Road connecting the 12th century shrine and the Sri Gundicha Temple, the destination of the chariots.

The Special Relief Commissioner has, however, relaxed weekend shutdown norms for Puri town on Saturday in order to make people undertake essential shopping for two days.

Meanwhile, ADG Law and Order,  RK Sharma Saturday reviewed the security arrangements for the festival. The stretch between Shree Jagannatha Temple and Gundicha Temple has been divided into four zones while the entire Puri town will remain under a total of 12 zones.

Around 65 platoons (one platoon comprises 30 personnel) will guard the festival. This apart, the security personnel will also be deployed on terraces of buildings adjacent to the Grand Road as the state government has banned rooftop viewing of the festival. 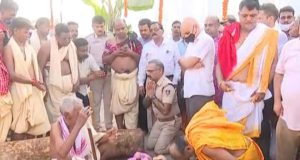 Tathya Correspondent - May 3, 2022 0
Puri: 'Ratha Anukula’ ritual marking the beginning of construction of chariots for the annual Rath Yatra of Lord Jagannath and his siblings...