Bhubaneswar: Ignorance is the curse of God; knowledge is the wing wherewith we fly to heaven. This famous quote of William Shakespeare is aptly applicable for Odisha. Despite having several geographical disadvantages which makes the State prone to natural calamities, mostly cyclones, it has certainly emerged as a land of opportunities in all sectors. The state’s annual budget, which was limited to some thousands of crore rupees, now touches Rs 1.70 lakh crore and the budget size is gradually increasing. But, what has been pulling the State down is lack of a proper mindset among the masses to prosper by utilizing rich mineral resources through industrialization, and a section with vested interests have succeeded in many places to win over the gullible people.

The people of Odisha are mostly simple and prefer to remain attached to their roots, tradition and culture. Though they can prosper with a little change of mind, the old ways keep them from development. This is true for decades ever since Odisha’s potentials were recognized globally. Stalwarts and global behemoths like Laxmi Narayan Mittal, Anil Agarwal and others fly to Odisha with aim to invest in the State for this potential.

Odisha’s main strength is its mineral resources. Be it iron ore, manganese, bauxite, chromium or nickel, the State has everything which could change its fate and of its inhabitants. However, the administration and successive State governments have failed to encash the State’s potential fully and now we curse our fate for every calamity. Japan is a place where geography does not support the country’s prosperity. Still, the people of Japan are known across the world for their openness and accept changes as they come instead of sticking to some traditional ideas. And everybody also knows how culturally and traditionally rich Japan is.

A country and a race can prosper by adopting new changes while maintaining its old tradition, culture and ethos. The people of Japan do not kick out the future while tightly holding on to the traditions. We bring this theory to the fore after the recent nuisance and violence at a public hearing in Koraput district over the mining proposal at Mali Hills, a rich source of rare bauxite mineral. The bauxite block is allotted to an Indian industry which has already set up its industry in the State and provided employment to many both directly and indirectly. Yet the mining proposal was opposed at the public hearing due to violence. The corporate giant cannot go ahead with the operations of the bauxite mines without a public hearing. Koraput and Rayagada are scheduled areas where the tribal dominate the place; and as per the law of the land, the consent of the local people is mandatory to start the mining operation.

In Niyamgiri, the local Dangoria Kandha tribes strongly opposed the bauxite mining for which a joint venture between the state-owned Odisha Mining Corporation and Vedanta Limited failed. Beginning with Congress leader Rahul Gandhi to foreigners in London were worried for Niyamgiri and its inhabitants. They highlighted the issue for which the project could not develop. It is good that the people in high places are concerned over the ecology of Odisha and Niyamgiri or Mali Hills in particular. Are they also worried about the prosperity of the local inhabitants? Has any “Sepoy” like Rahul Gandhi or any other leader ever thought of the welfare of the Dangoria Kandha people living in Rayagada and Koraput districts? Hundreds of years ago, they were living in forests like today. They worship ‘Dharani Penu’ under open sky in hilly terrain. There is no change in their lifestyle, or their socio-economic condition.

Odisha’s ruling BJD, which has won successive elections since 2000 after landslide victories, has always failed to persuade the people opposed to the mega projects, be it POSCO in Jagatsinghpur or mining in Niyamgiri and Mali Hills. Surprisingly, Naveen Patnaik, who has been the Chief Minister of Odisha for five times in a row, witnessed Dangoria Kandha tribes rejecting the State Government’s proposal for a mining operation in Niyamgiri Hills. All the five Gram Sabhas held in the foothills of Niyamgiri, voted against mining for the simple reason that the local tribe’s presiding deity will be affected apart from the local ecology.

Similar is the case in Mali Hills of Koraput and bauxite mining proposal in Karlapat forest range in Kalahandi district. There should be no doubt that the minerals are reserved in dense forests and the jungles are the place where the tribal people live. In order to explore the minerals, the State Government and the industrial giants need cooperation of the local people without which the dream of making Odisha a prosperous land would fall flat. No doubt that Odisha had made substantial development in the industrial sector. But that is too small keeping in view Odisha’s hidden potentials.

Anyway, the time has come for the people at the helm to think about whether the tribals, dalits, and forest dwellers are opposed to the development or they are misguided by some elements?

There are small groups of the urban elite, who in fact mislead the gullible and innocent people against development while they themselves enjoy all the material comforts for their living. The ignorant people are continuously told that the industrial giants in the guise of the development would loot everything including their culture, tradition and presiding deities.

Interestingly, a strong government in Odisha, has also made no effort to make the people understand the reality and generate awareness among them. Strong political will is needed to free these gullible people from the clutches of the vested interest groups. This is high time, the State Government should create a separate force of volunteers to go round the remote areas round the year and make people aware of the State’s potential and future ahead. The State Government which can create a huge army of Mission Shakti, can easily make people aware of the State’s potential. This is missing and the State is losing heavily on this count.

If the State’s mining and industry sector is improved and utilized to its fullest extent, Odisha would certainly become financially independent and prosperous as legendary leader Biju Patnaik had said and urged people to act on the same line. 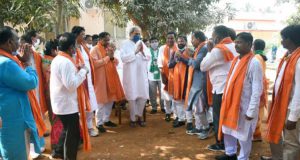