Agartala : Top Commanders of Border Security Force (BSF) and Border Guard Bangladesh (BGB) have agreed to amicably resolve all bilateral issues to achieve the common goal of establishing peace and tranquility along the International Border.

Other senior officers of Border Guard Bangladesh, representatives of Ministry of Foreign Affairs and Ministry of Home Affairs Bangladesh are also participating in the conference.

During the deliberations in the conference held 7 June, various border issues of bilateral interests were discussed at length including trans-border crimes, smuggling of contraband articles and cattle, Indian Insurgent Groups activities from Bangladesh side, FICN etc.

Besides, the construction of Single Row Fence (SRF) in the State of Tripura & other pending developmental works were also discussed at length during the conference.

After discussion in a free and open atmosphere, both the leaders of the delegation agreed to amicably resolve all the bilateral issues to achieve the common goal of establishing peace and tranquillity along the International Border.

Embarking on the path of ‘Confidence Building Measures’, two Border Guarding Forces of India and Bangladesh have been forging ahead in their ever growing friendly association by participating in Inspectors General BSF – Region Commanders BGB level Border Co-ordination Conference biannually as per the traditions.

Over the past few years, BSF & BGB have jointly cemented their friendly relationship and acquired new heights in mutual trust and cooperation by resolving all border issues through meaningful dialogues.

It may be noted that last such Border Co-ordination Conference was held in BSF Tripura Frontier, Agartala in November 2020. 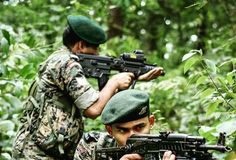 Tathya Correspondent - July 27, 2021 0
Bhubaneswar: With the massive improvement in situation in Left Wing Extremism (LWE) affected areas, the Centre has excluded several districts from its...