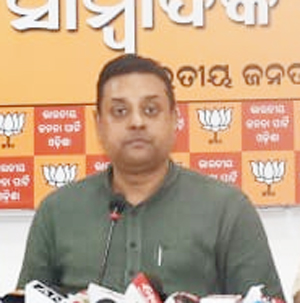 Mr.Patra, who arrived here today morning, visited the injured persons at AIIMS Bhubaneswar. Later, holding a press conference, he highly condemned the incident and said it has maligned the image of Odisha, which is known for peace across the globe.

Speaking about the incident, Patra said, “As BJP was all set to win both block chairman seats under Chilika constituency, the BJD MLA was trying to take control over the democratic process of election. However, he failed to do so.”

Out of forestation, the legislator tried to kill around 20 BJP workers including women by ramming his vehicle, alleged the BJP leader. This is a matter of concern that an elected MLA has committed such a crime, that too probably under the influence of alcohol, he said.

Describing the suspension of Jagdev from BJD as a drama, he said, “After suspension, he was seen attending BJD meetings and campaigning for the party.”

Despite knowing that Jagdev is a habitual offender and involved in several violence incidents in the past, the regional party (BJD) has not expelled him. Even, he was given ticket for the second time by the party, the BJP leader said.

“We want to ask why the BJD did not expel Jagdev. We demand stern action against him,” he demanded.

The BJP leader said his party has won Assembly elections in four States and it has lost in one State Punjab. However, no violence has been reported in any of these States because the BJP workers never indulge in violence.

When it comes to the case of West Bengal and Odisha, such poll-related violence is being reported. After West Bengal election, hundreds of BJP workers have been got killed and in Odisha, so many violence incidents have reported during the entire panchayat election and yesterday’s case is an example of torture on BJP workers, he pointed out.

He alleged that the MLA has maligned the image of the peace-loving people of Odisha who are known for their simplicity, good manner, peaceful coexistence and non-violence.

Despite knowing this truth, if the BJP wants to drag the BJD unnecessarily to politicize this barbaric incident, then it’s extremely sad and unfortunate, said Dr.Patra.

He urged the BJP not to politicize this barbaric incident.

“We would like to remind the Odisha BJP that when a similar incident had taken place in their party ruled State, they had appealed not to politicize that issue and let law take its course. But the Odisha BJP is taking another stand on this issue now. We appeal to the Odisha BJP not to indulge in double standards on such sensitive issues,” the BJD Spokesperson stated.

He further informed that the Police had already issued a statement yesterday on the strictest action being taken against the Chilika MLA and we are sure that the accused will face the strictest punishment as per law of the land.