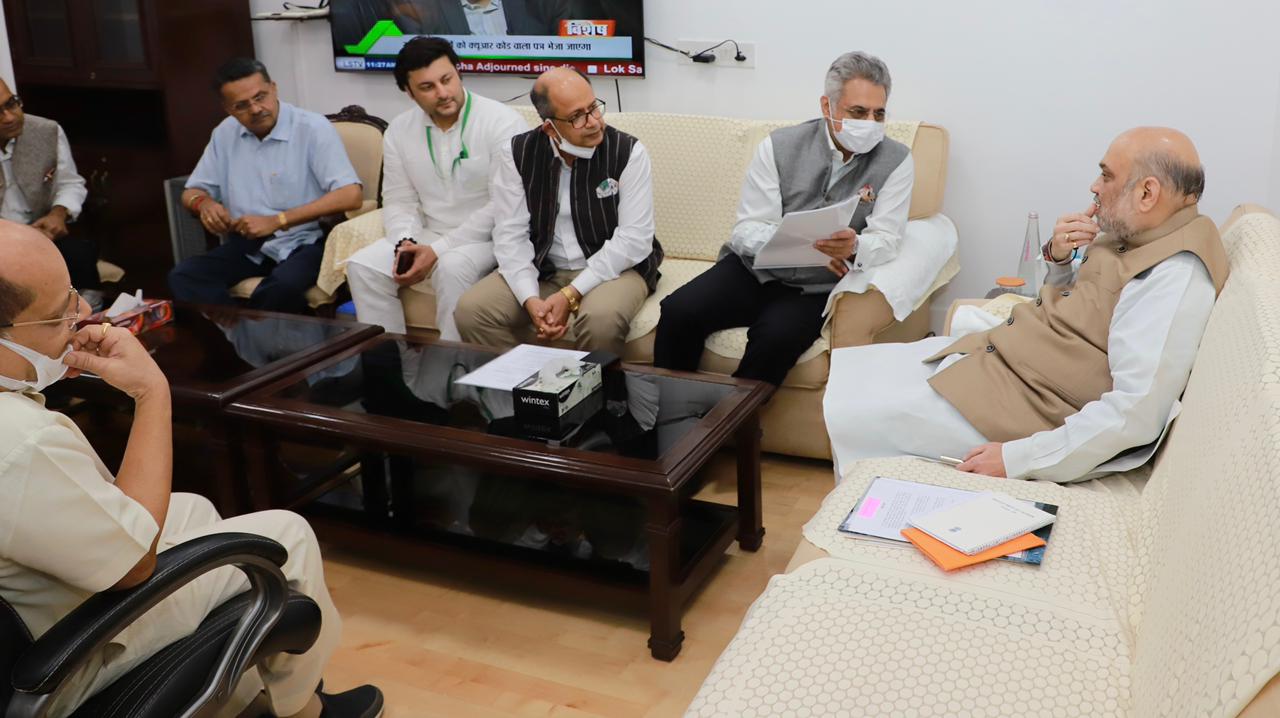 New Delhi: The Governing Biju Janata Dal (BJD) again pushes the Centre for conduct of caste-based Census for identifying and enumerating the SEBC/OBCs.

A delegation of BJD MPs from both Lok Sabha and Rajya Sabha met Union Home Minister Amit Shah at his Parliament Chamber this morning and submitted a memorandum, in this regard.

They have demanded for increasing the reservation beyond the 50 per cent ceiling by enacting a central legislation for empowerment of States.

To promote the interest of the educationally and economically weaker sections of the population, the Mandal Commission has identified a list of backward castes/ classes for the country.

Similarly, Government of India has also notified OBC list for the State of Odisha in the year 1994 and after revision from time to time presently there are 198 numbers of castes/classes in OBC list in respect of Odisha.

Various States have formulated reservation policy for OBC/SEBC for their up-liftment which has been challenged in various courts on the ground that there is no justified scientific data for mapping the reservation policy.

In its memorandum, the BJD delegation has given important judgments given by the Supreme Court and Orissa High Court on the reservation policy. In all judgments, the courts have said that a detailed scientific database is required with regards to the SEBC/OBC category for formulation of accurate reservation policy for holistic development and benefit of these categories of population, the MPs said.

Accordingly, the State Cabinet in its meeting held on January 11, 2020 had resolved to conduct Socio-Economic Caste Enumeration.

Basing on the Resolution of the State Cabinet, the then Chief Secretary Asit Tripathy on January 13, 2020 had intimated the Cabinet Secretary for considering the proposal for conducting Census for SEBC and OBC category in General Census 2021.

However, the Registrar General and Census Commissioner India on February 17, 2020 had intimated the State that enumeration of OBC/SEBC/ other castes etc. has not been taken up in 2021 Census on the ground that the collection of data of OBC/SEBC/other castes etc. will adversely affect integrity of Census exercise.

Following this move, the Odisha Legislative Assembly cutting across the party line has unanimously passed a Resolution on February 17, 2020 to get a clear picture of the social and educational conditions of people belonging to Backward Classes in Odisha,

“Backward Classes and Other Backward Classes/ Castes, geographical area of their spread and density has been a huge challenge in ensuring focused and outcome specific planning. The necessity of having such data was well appreciated by the Government of India as evident from Socio Economic Caste Census of 2011,” the BJD members said in its memorandum.

Due to non-availability of reliable and authentic data about the exact numbers of the SEBC and OBC it has become an impediment for taking up focused planning for the welfare of these communities. For a welfare Government, it is a Constitutional obligation and abiding commitment for inclusive growth of the weaker sections of the society, it said.

“It is high time that the Central Government frames a legislation in this regard for benefits, welfare and all round upliftment of the SEBC/OBC categories of population after collection of scientific database through General Census 2021 for establishment of compelling reasons, like, backwardness, inadequate representation and overall administrative efficiency,” they said.

All the Parliamentarians requested Shah to consider the proposal for insertion of appropriate columns in the Census format 2021 to get a clear picture regarding Socio Economic and Educational Status of SEBC/ OBC/ other caste/ class for formulation of appropriate policy for their benefits.The Union Minister appreciated the concern of the Odisha BJD MPs for increasing the reservation ceiling beyond 50% and for Caste-based Census for the SEBC/OBCs. The meeting was cordial and positive, sources said.

Tathya Correspondent - June 2, 2021 0
Bhubaneswar: Former Minister Bijayshree Routray is no more. He passed away at a private hospital here on 2 June...