Bhubaneswar: Ahead of the Padampur by-election, Governing BJD and Opposition BJP have locked their horns over delay in disbursement of crop insurance claims to farmers of Odisha affected due to drought in kharif 2021 crop season.

The delay in disbursing crop insurance claims under Pradhan Mantri Fasal Bima Yojana (PMFBY) and input subsidy has become a major issue for the by-election Padampur by-poll. The drought-hit farmers of the area are on a protest path and requested all political parties not to take part in the election process until their demands have not been fulfilled.

To please the farmers, Chief Minister Naveen Patnaik on November 15 announced Rs.200 crore for the distressed farmers of the drought affected areas of the state.

While announcing the input subsidy, Patnaik had blamed the Centre for the delay.  Despite continuous follow up and pursuance by the Odisha government with the technical advisory committee (TAC) under the Ministry of Agriculture & Farmers Welfare, many of the affected farmers have not yet received their crop insurance dues, the CM had said in a statement.

Countering Mr.Patnaik’s allegation, Union Agriculture Minister Narendra Singh Tomar has written a letter to the Odisha CM. In the letter, Mr.Tomar said that the responsibility of floating the bids for the implementation of PMFBY, allocating the cluster of districts to the insurance companies (ICs) and agreement of premium rates vests with the state government as per the norms of the Revamped Operational Guidelines (ROGs).

The responsibility of conducting transparent crop cutting experiments (CCE) through the CCE app also rests with the state government, he said.

He said that the Centre promptly responded to it and advised the state authorities to get them examined by STAC, which Odisha had not constituted despite it being part of the guidelines since 2020. “Also the GoI put up the matter before the TAC as soon as the appeals against STAC order were received and the matter was taken to its logical conclusion,” Mr.Tomar wrote.

The Union Minister further informed that after due follow up, majority of claims in disputed districts have been settled at the TAC and complete settlement is expected by this week. Out of nine disputed districts, Rs. 723 crore is the total payable claim out of which Rs. 622 crores has been settled.

Meanwhile, the BJP has announced to launch an indefinite satyagraha outside the Assembly, starting Friday.

“The Potato Mission and Onion Mission have been completely failed in the State. But despite that, there is no policy in place to help farmers recover losses,” he said.

The BJP leader alleged that 90 percent of fertilisers available in the market are duplicate. Farmers don’t get loans on time. They are at the mercy of middlemen for resources, supply of seeds, and fertilisers, Harichandan said.

He further alleged that the farmers were getting Rs 4,000 under the KALIA scheme instead of Rs 10,000 as promised while referring to the 2019 elections.

Addressing media persons, BJD MP Sasmit Patra alleged that the letter of Mr.Tomar is flawed, faulty and is based on distorted facts and half-truths. The letter does not mention the CM’s letter and state cooperation ministers’ meeting with him.s

On BJP’s announcement for protest, Dr.Patra said that the BJP should instead hold the dharna before Parliament and urge its party at the Centre to give up its anti-farmer attitude.

“The BJP MLAs had unanimously supported the resolution along with all MLAs of BJD and Congress to increase the MSP of paddy to Rs 2930 in Odisha Vidhan Sabha in 2018. They should ask the Centre to implement it,” Dr.Patra said. 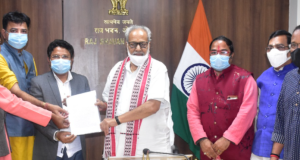