The Event was organized by the Department of Sports and Youth Services Department (DoSYS) within the Kalinga Stadium.

Vishal K Dev, Principal Secretary, Sports and Youth Services and other officials and dignitaries of DoSYS were also present on the occasion.

Minister Mr.Behera, said, “It is heartening to see the enthusiasm of the participants. Despite the pandemic phase, we wanted to host this annual event and keep the legacy going”

He said Mini Marathon instituted in the name of Biju Babu has always offered a fantastic running experience and there are many who eagerly await this event. It is also our way of promoting health and fitness and next year we are hoping to conduct it in its usual grand format.”

On this day, Mr.Behera said “I urge you all to follow the principles and ideals the of the Legendary Statesman Biju Patnaik”

Unlike previous editions, this year, the Mini Marathon was closed to public. Sportspersons and officials associated with DoSYS participated in the run in regulated clusters, following COVID- 19 guidelines. 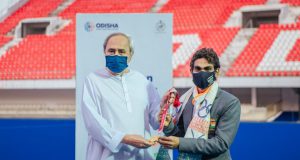