Jharsuguda: Stage is all set for the by-poll to the Brajrajnagar Assembly seat with the filing of nomination papers by heavy weight candidates by all three major political parties in the State, BJD, BJP and Congress.

In a show of strength, BJD candidate Alaka went to the office of Jharsuguda Sub-Collector and Returning Officer in a massive rally with her supporters and senior party leaders and filed the nomination papers.

The senior leaders of the governing party claimed that they will win the by-poll with a big margin of over 50,000 votes.

“Naveen Patnaik, the people’s leader, always stands with the people in every moment of life. Late Kishore Mohanty was also having a strong and close relation with people of the area. We will definitely win the by-poll with over 50,000 votes,” said Mr.Behera.

Health Minister Mr.Das too claimed that Alaka will win the election with a margin of more than 50,000 votes. Wait and see till June 3, he said.

Congress nominee Mr.Patel too filed his papers before the Returning Officer on the last day in presence of senior Congress leaders and his supporters.

Alaka, widow of late Kishore Mohanty, entered into direct politics and will fight the Assembly election for the first time.

BJP nominee Ms.Panda has already once been elected to the Assembly from the Brajrajnagar constituency by defeating BJD candidate Anup Kumar Sai in 2014.

She, however, lost to BJD’s Kishore Mohanty by a margin of 11,634 during the last Assembly polls held in 2019. The saffron party has given another chance to Ms.Panda.

Similarly, Congress has also nominated its senior leader and former Speaker and ex-Minister Kishore Patel for the by-election.

Mr.Patel has been elected to the Assembly thrice from Sundergarh MLA seat in 1977, 1980 and 1995. However, he unsuccessfully fought from Brajrajnagar seat in 2014.

Governing BJD grabbed the seat in the last election held in 2019. Now, all eyes are on the by-poll as all three parties have a strong hold in the constituency.

The by-poll was necessitated following the untimely demise of BJD’s Kishore Mohanty’s in last December. The Election Commission of India has announced May 31, 2022 as the date for the by-election to the Assembly seat. Voting will be held from 7 AM to 6 PM.

The nominations will be scrutinised on May 12 while the candidates can withdraw their candidature by May 17. Counting of votes will be done on June 3. 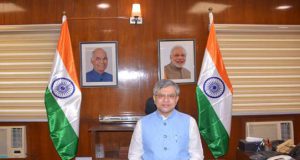