Bhubaneswar: Amidst allegations of the Odisha’s Governing BJD tilting towards right since installation of Narendra Modi Government at the Centre, particularly after the 2019 General elections, the regional party has adopted a new strategy to deal with the situation.

Chief Minister Naveen Patnaik, who had adopted the policy of equal distance from both the BJP and the Congress earlier, has clearly said that the BJD will favour any government at the Centre which fulfils Odisha’s requirements.

BJD’s right tilt became evident after Naveen supported BJP’s Ashiwini Vaishnaw in the 2019 Rajya Sabha elections. This stance has subjected BJD to criticism from different parties as well as from own members.

Meanwhile, the BJD on its 23rd Foundation Day made its policy shift clear when Naveen came down heavily on the national parties including BJP. He alleged that the national parties were not interested to protect the interest of Odisha; instead they focus on the states which elect more MPs and MLAs.

The national parties therefore force their policies on small states to protect the interest of large states in order to bolster their vote banks. Since the beginning of the New Year, Naveen’s party has also been targeting the BJP though the regional party appeared to be a friend of the NDA Government at the Centre. Naveen’s new strategy is: Aye for Union Government, No for BJP.

When the entire country was agitating over the Centre’s controversial farm laws, the BJD took a different stand. Even as 19 opposition parties boycotted President Ram Nath Kovind’s address to Parliament to protest against the new agriculture laws, BJD MPs attended the formal inauguration of the Budget Session on Friday.

The BJD supported the Centre even as it gave a different message to the public as well as to the parties. Naveen took this decision despite his party’s acrimony with the BJP in Odisha on several counts. The relationship between the BJD and the BJP has recently been bitter after the saffron party accused the Odisha Government of trying to shield an accused in the rape and murder of a minor little girl in Nayagrh as he was an aide of a minister. The BJP had been demanding a CBI probe into the Nayagarh case after rejecting an SIT investigation ordered by the state government.

Similarly, the BJP has also demanded arrest of another minister, whose name figured in the list of accused persons allegedly involved in murder of two local BJP leaders at Mahanga in Cuttack district. The BJP has also launched a farmers’ agitation in Western Odisha alleging gross mismanagement in the paddy procurement. This apart, BJP also raised issues related to land sale of Bagala Dharmashala in Puri.

However, notwithstanding the BJP’s attack on the state government, the regional outfit’s MPs attended the President’s address to the joint session of the Parliament. The regional outfit has all along stood by the Union Government and come to its rescue when it faces contentious issues in Parliament. Naveen had also backed BJP’s Om Birla for the Lok Sabha Speaker’s post, supported the Jammu and Kashmir Bill, Triple Talaq Bill and many other bills and also during the demonetization process.

Then, why did Naveen support the Centre even when the state BJP strived to halt BJD’s development in Odisha? Is BJD unable to take a decision in regard to BJP or whether the regional party is succumbing to the alleged CBI threat for chit-fund scam or any other old cases?

The political analysts are free to attribute any reason to BJD’s support to the Centre, Naveen this time means business and is in an unrelenting mood. Though the Centre has not yet accorded Special Category Status to Odisha, the state has benefited in many ways in terms of allocations made for fighting the natural calamities and satisfactory allocation in railway budget. The Centre on Friday sanctioned Rs 320 crore as flood assistance.

Though, these developments are not visible to the general public, this has been achieved only for the BJD’s successful handing of the central government affairs and just by ignoring the noise created by saffron party leaders in the state, a senior BJD leader said, adding that in coming days also, the regional party would adopt the same strategy to gain benefit for Odisha.

The main focus presently was to get maximum support from the Centre in expanding railway, telecom network, financial inclusion, GST waiver on certain forest and handloom & handicraft products and revision of coal royalty. The Centre has already agreed for the State’s desired reforms in the MMDR Act.

More or less, the BJD would like to behave with the Centre in a responsible manner and achieve maximum gain for Odisha. Most importantly, while saffron brigade is harsh against BJD government, top saffron leader and Union Minister Dharmendra Pradhan has been providing crucial support to Odisha Government. Be it provision of two more mines or sorting out of tax issues with Indian Oil or extending emergency financial aid to cyclone devastated Odisha and crucial support during COVID-19 Pandemic. For this, Mr.Pradhan is extended ‘Red Carpet’ treatment in Odisha.

Naveen Patnaik has clearly understood that the State’s development could not be achieved without active support of the Central Government. Therefore, Naveen has to make a tight rope walk between politics and development. If he gives importance to politics alone and enters into a slugfest with local BJP leaders, the State Government may not be able to spur development in the State.

Therefore, the CM has adopted a policy of ‘Aye To Centre’ and ‘Nay for State BJP’, while ignoring local level politics to achieve development at macro level, which would give a big dividend to the governing BJD in the long run. 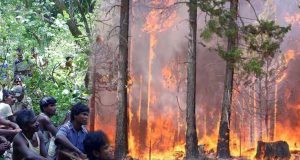 Braja Mishra - March 6, 2021 0
Bhubaneswar: When there is unrest in civil society, people burn tyres on main roads to draw the attention of the government and...