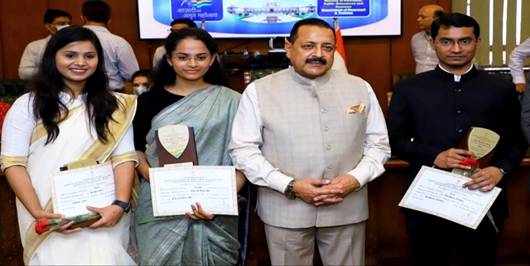 Welcoming the top-20 rankers and their family members, Dr. Singh said that it is indeed very encouraging to note that the top 20 candidates include 10 female candidates and they also represent a pan-India coverage as these candidates hail from the States/UTs of Bihar, Chandigarh, Delhi, Gujarat, Haryana, Jharkhand, Kerala, Madhya Pradesh, Rajasthan, Telangana and Uttar Pradesh.

The Minister said that the demographic change both at gender and regional level in the last few years augurs well for a diverse country like ours.

He was informed that a total of 761 candidates (545 men and 216 women) have been recommended by the Commission for appointment to various Services this year.

During the interaction, Dr. Singh said that in 2014, he had introduced in the DoPT a new tradition of personally inviting the All India Toppers to North Block and felicitating them and since then this tradition continues.

Describing the young officers as Architects of New India, Dr. Singh said, they are privileged to enter the services during 75th Year of India’s Independence and added, they had eventful 25 years ahead to serve when independent India turns 100 and realises Prime Minister Narendra Modi’s vision of New India that leads the rest of the world. He said, under Prime Minister Modi, India is already on the ascent and Civil Servants of this new genre have the privileged responsibility of taking it to the top league in the global arena.

Dr. Singh also recalled some of the path breaking reforms brought in for the young probationers and IAS officers during the last seven years. These, he said, included introduction of a 3 month stint of mentorship at the Central government before giving over to the respective State or Union Territory to join the allocated cadre.

Dr. Singh also noted the presence of eleven Engineers and three Medicos in the first 20 toppers of this tear, which he hoped will add value to the work assigned to them in carrying out various specialized schemes and programs introduced by the Modi Government in the last 6-7 years. The Minister hoped that the technocrats will be able to do justice to the flagship programs of the government in sectors like Health, Agriculture, Sanitation, Education, Skills and Mobility to name a few.

Dr. Singh said the training is also undergoing a sea-change in LBSNAA Mussoorie and other Central Training Institutes with a renewed focus on modern curriculum and Integrative Approach. He said, through Mission Karmayogi, the ultimate objective of the Governance is to bring “Ease of Living ” for the common man of India.

While welcoming toppers of CSE 2020, P K Tripathy, Secretary, Department of Personnel and Training said that the officers are entering the service in the beginning of Amrit Kaal and they have to play a stellar role in next 25 years to define the future of the country. He wished that in their great career ahead full of diverse opportunities and challenges, they would be able to give their best to the country. The program was attended by all the senior officers of the Department.