Mr.Tripathy visited Bargarh and reviewed the progress of developmental works in the district today.

Reviewing the progress made so far, Mr.Tripathy directed the district administration to focus on development of agro- enterprises in the district.

He said, “ There is promising scope for development of  agro- enterprise in the sectors of vegetable cultivation, horticulture, agriculture produce processing, inland fishing, mushroom and sweet corn cultivation in the district. These enterprises, while attracting the youth will also create new employment opportunities and will enhance per capita income in the district”.

Further, Mr.Tripathy directed concerned district level officers to identify the critical gaps in infrastructure laying and service delivery. They were asked to formulate the essential projects as per the identified gaps and put those to Government for financing under WODC funds. 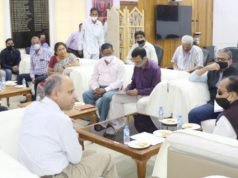 Tathya Correspondent - February 15, 2021 0
In order to give emphasis on Ease of Doing Business for Industrialization of the State, State Government Monday allowed enhancement on purchase...