Minister of Petroleum & Natural Gas and Steel Dharmendra Pradhan Pradhan said that an investment of about $60 billion which is more than Rs 4 lakh crore, is being made in the gas infrastructure which includes laying of pipelines, terminals, gas fields.

He said there are 2300 Compressed Natural Gas (CNG) Stations in the country and India will become the largest energy consumer in the world in the coming years.

Union Minister today dedicated 42 CNG stations and 3 City Gate Stations of Torrent Gas to the service of the community.

All CNG stations and City Gate Stations were connected through video conference during the event with the Minister.

Speaking on the occasion, Minister Pradhan called upon all CGD agencies to grow into the Comprehensive Energy Retailers. He said that the Government has visualized that consumers, as per their purchasing capacity and their choice of fuel, should be able to buy any type of fuel from the retail outlet- be it petrol, diesel, CNG, LNG or electric charging.

He also said that the Government wants to supply fuel through the mobile dispensers so that consumers can get the fuel at their doorstep, as per their convenience. The Minister said that the strategy is being made to expand the battery swapping facilities also. The Minister advocated adopting the digital platforms on large scale, in every aspect of transaction.

He said that the country is moving towards the gas-based economy, which is not only clean and efficient fuel, but will also help in reducing the country’s dependence on imported crude oil.

He said that 500 such plants are already being set up, and the target is to reach 5000 such plants. He said that during the pandemic, our Corona-warriors, braving the threats, ensured timely supply to consumers at their doorsteps. 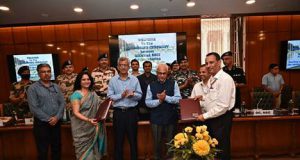 Tathya Correspondent - May 9, 2022 0
New Delhi: Solar Energy Corporation of India (SECI) has signed an MoU with the Union Ministry of Home Affairs   in order to...