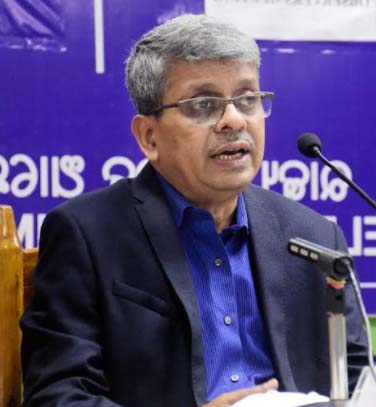 Bhubaneswar: Ahead of the first phase voting for Panchayat elections, the State Election Commissioner Aditya Prasad Padhi on Saturday made it clear that no political leaders can stay in any other poll-bound constituency after completion of the campaigning period.

Mr.Padhi today discussed the preparedness made for the ensuing Panchayat polls with district collectors through videoconferencing mode.

Briefing reporters after the meeting, Mr.Padhi said as per the new circular issued for the Panchayat elections, no outsider or political leader will be allowed to be present in poll-bound areas after campaigning ends, which is 36 hours before the polling.

All the outsiders including political leaders will have to vacate poll-bound areas by February 14 evening. They can’t stay there as it will be a violation of the Model Code of Conduct, Mr.Padhi said.

The Commissioner said the first phase Panchayat polls are set to be held on February 16. It will be conducted across 30 districts and 71 Blocks. On that day, polling to 200 Zilla Parishad zones, 1669 Gram Panchayats and 22,379 wards will be completed with 67.51 lakh voters expected to exercise their franchise, he informed.

The Commission has identified the sensitive booths and extra police personnel will be deployed to ensure a smooth election.

“Videography will be done in sensitive polling booths. CCTVs will be installed in the strong rooms and during counting halls,” he said.

Speaking about urban elections, Padhi said, “We have already published the draft electoral roll for the urban local body election and it has been shared with all political parties.”

The electoral roll can also be found on the official websites at the district-level and corporations. People can file their objections (if any) till February 16, he added.

The SEC further said that for the first time, the voters will have the NOTA (None of The Above) option in the urban local body polls.

Tathya Correspondent - January 21, 2022 0
Bhubaneswar: The State Election Commission (SEC) is taking all steps for smooth conduct of the Urban Poll soon after the Panchayat elections...