Bhubaneswar: Ahead of the Dhamnagar bypoll, the Governing Biju Janata Dal (BJD) and Opposition BJP on Monday held demonstrations in the capital city against each other.

The BJD has staged demonstration before Raj Bhawan and all district headquarters across the State over delay in payment of crop insurance dues to farmers by Centre, while the BJP took out a mega rally in the city over involvement in BJD leaders in lady blackmailer Archana Nag case and death of BJD Zilla Parishad Member Dharmendra Sahoo.

BJD claimed that a large number of farmers are yet to get crop insurance money of kharif 2021 under the Pradhan Mantri Fasal Bima Yojana (PMFBY), a Union Government sponsored crop insurance scheme.

BJD spokesperson Lenin Mohanty said thousands of farmers are yet to get crop insurance money for kharif 2021 under the PMFB. The insurance companies are delaying the process of payment of around Rs 500 crore, he added.

In July, the State Government had written two letters to the Centre requesting the latter’s intervention regarding non-payment of claims by insurance companies for the kharif 2021 in Odisha. It is very unfortunate that the Centre has yet to take any action leaving lakhs of farmers in lurch, said Mohanty.

BJD women wing President Snehangini Chhuria said the Centre should ensure that farmers get crop insurance amount without much delay as PMFBY is a Central Government scheme.

Dubbing BJD’s protest as a gimmick to distract public attention from ‘cash for vote’ scandal in Dhamnagar Assembly by-poll, BJP state general secretary Prithiviraj Harichandan claimed that farmers are suffering as the State Government flouted guidelines laid down for resolution of insurance issues.

The national technical advisory committee (TAC) is looking into the issues and resolving them. The next meeting of the TAC is scheduled for November 3. Prior to the meeting, the BJD is doing drama to hoodwink the farmers, said Mr.Harichandan.

On the other hand, the BJP took out a protest rally from the party office and tried to march towards Naveen Niwas. However, police stopped the BJP leaders and workers at Sishu Bhawan square.

The BJP is demanding CBI probe and action against BJD leaders allegedly involved in the sensational lady blackmailer scandal and death of Nimapara ZP member Dharmendra Sahoo. A large number of BJP workers and leaders were detained as a preventive measure.

Though several BJD leaders and ministers are involved in the two sensational cases, Chief Minister Naveen Patnaik is sitting idle. To wake him up from the deep sleep, the BJP has organised this rally, said Shrimati Samantsinghar. 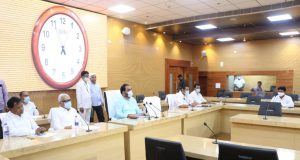