On National Financial Reporting Authority (NFRA), the Minister stated that the Company Law Committee constituted by the Ministry  of  Corporate Affairs in its report of March, 2022 (Chapter 1 Para 11) has inter-alia, recommended that NFRA be empowered to take appropriate action against other contraventions under NFRA Rules, 2018, in addition to its existing powers to take action against ‘professional or other misconduct’. The report is available on the website of Ministry of Corporate Affairs (www.mca.gov.in), the Minister stated. 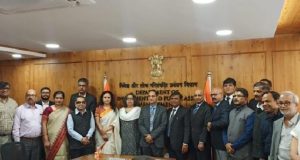